Nephrectomy is a surgical procedure to remove all or part of a kidney:

In some cases, these laparoscopic procedures are performed using a robotic system. In robotic surgery, the surgeon sits at a computer console near the operating table. He or she controls the camera arm and mechanical arms, which have surgical instruments attached to them that are working inside the patient’s body.

The most common reason a urologic surgeon performs a nephrectomy is to remove a tumor from the kidney. These tumors are usually cancerous, but they can be noncancerous (benign). Sometimes a nephrectomy is needed because of other kidney diseases.

Most people have two kidneys – fist-sized organs located near the back of the upper abdomen. Your kidneys:

Often a urologic surgeon performs nephrectomy to remove a cancerous tumor or abnormal tissue growth in a kidney. The most common kidney cancer in adults, renal cell carcinoma, begins in the cells that line the small tubes within your kidneys.

Kidney tumors in children are rare. But when they occur, children are more likely to develop a type of kidney cancer called Wilms’ tumor, probably caused by the poor development of kidney cells.

The decision about how much kidney tissue to remove depends on:

The urologic surgeon makes a decision based on the results of imaging tests, which may include:

Treatment for other conditions

A partial or radical nephrectomy may be needed to remove severely damaged, scarred or non-functioning kidney tissue due to traumatic injury or other diseases. 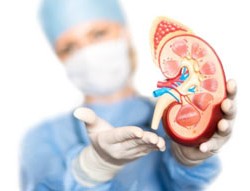